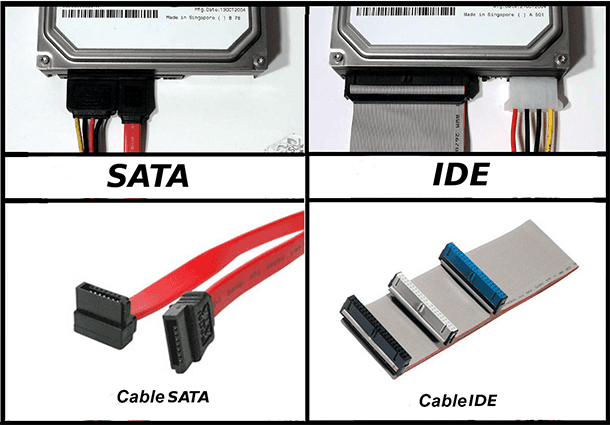 1. Short for Integrated Drive Electronics, IDE is more commonly known as ATA or PATA (parallel ATA). It is a standard interface for IBM computers that was first developed by Western Digital and Compaq in 1986 for compatible hard drives and CD or DVD drives. IDE is different than SCSI and ESDI (Enhanced Small Disk Interface) because its controllers are on each drive, meaning the drive can connect directly to the motherboard or controller. IDE and its updated successor, EIDE (Enhanced IDE), are common drive interfaces found in IBM compatible computers. Below is a picture of the IDE connector on a hard drive, IDE cable, and the IDE channels on the motherboard.

How many drives can each IDE channel support?

Each IDE channel can support two drives. A single IDE ribbon cable has three connection. One connection connects to the motherboard and the other two connections are available for the two drives.

2. Alternatively referred to as IDLE, IDE is short for integrated development environment, and are visual tools that allow programmers to develop programs more efficiently. Commonly, an IDE may have a compiler, debugger, text editor, and other integrated tools. Smalltalk was the first programming language to have a first true IDE.

Serial communication transfers data one bit at a time, rather than in several parallel streams. Despite the apparent advantage of the parallel model, in practice serial transmission is less susceptible to interference, allowing SATA to operate at significantly higher speeds than PATA. The serial model also allows for simpler and slimmer cabling.

Types Of CPU And Its Sockets