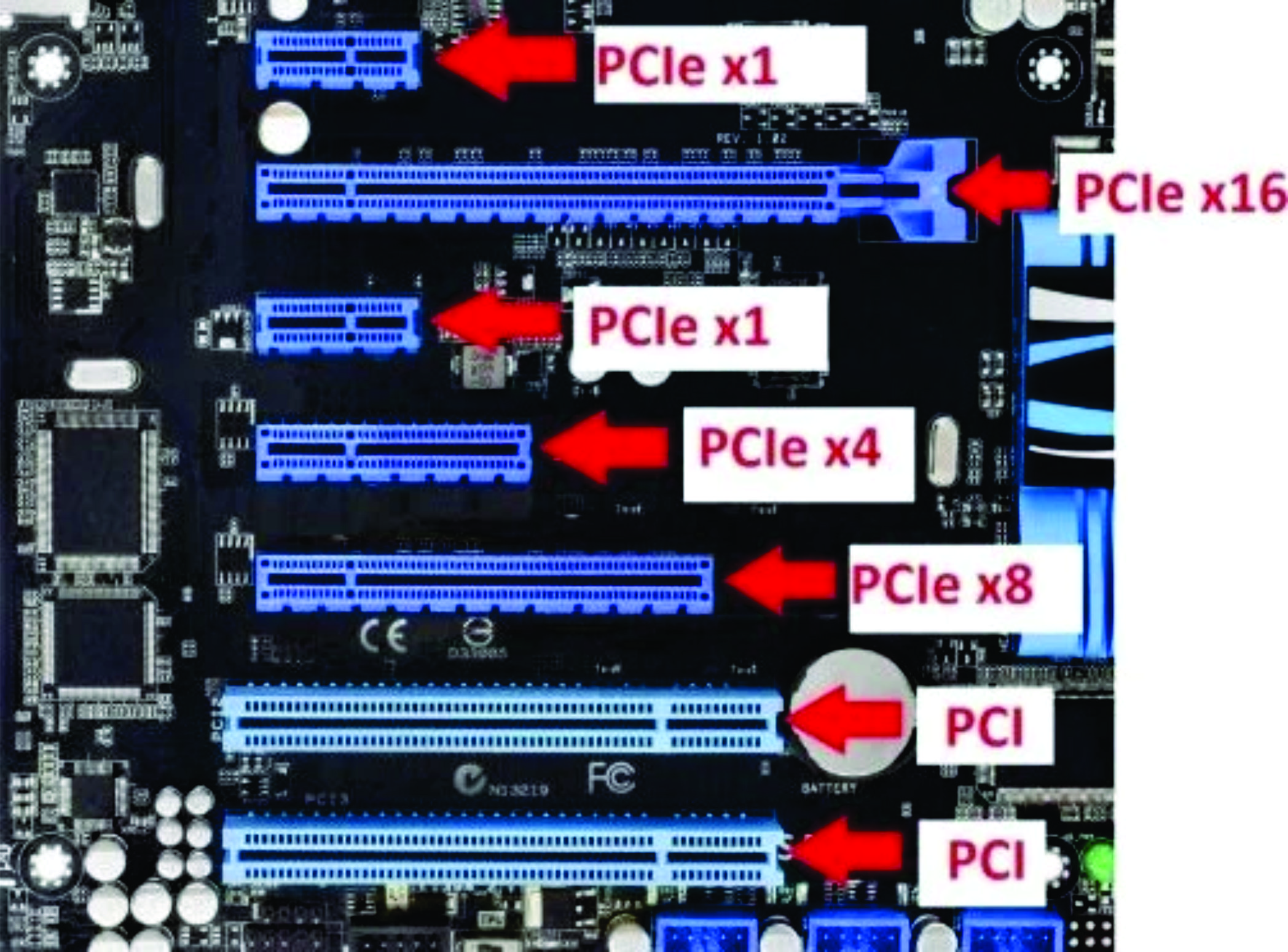 What Does Expansion Slot Mean?

An expansion slot is a socket on the motherboard that is used to insert an expansion card (or circuit board), which provides additional features to a computer such as video, sound, advanced graphics, Ethernet or memory.

Industry Standard Architecture, ISA was introduced by IBM and headed by Mark Dean. ISA was originally an 8-bit computer bus that was later expanded to a 16-bit bus in 1984. When this bus was originally released, it was a proprietary bus, which allowed only IBM to create peripherals and the actual interface. However, in the early 1980s other manufacturers were creating the bus.

In 1993, Intel and Microsoft introduced a PnP ISA bus that allowed the computer to automatically detect and setup computer ISA peripherals, such as a modem or sound card. Using the PnP technology, an end-user would have the capability of connecting a device and not having to configure the device using jumpers or dip switches.

Used To Connect Low Speed 16 Bit ISA Cards For Sound/VGA/Modem/LAN and other.

All modern computers no longer have ISA slots and instead utilizing PCI slots. Below is an example an ISA expansion card and ISA slot it connects into on the motherboard.

PCI means “Peripheral Component Interconnect”. It can be used to install almost any type of hardware as long as the versions are correct.

Due to the high level of compatibility and data transfer rate, PCI expansion slots have been at the peak. We also have upgraded and more powerful expansion methods like PCIe (PCI Express) and PCI-X (PCI Extended) who are the direct descendants of PCI expansion slots.

PCI expansion slots can be used in many applications such as the sound card, ethernet systems, and network cards, video cards or GPUs, modems, SCSI, RAM, SSD, and many more.

PCI expansion slots come in different sizes, but the basic looks are almost the same. It’s a long slot that looks much like a rail line. The slot has a lot of holes with a connector inside, and a long tiny slotted hole in the middle. PCI slots come with notches, that differentiate between the versions of cards it can support.

The connectors of PCI cards are called “Edge connectors” which are used to connect them to the expansion slots after inserted. In typical motherboards, we can see up to 7 expansion slots for different purposes. Another physical type is the daughterboard which is directly mounted to the system. These daughterboards contain attachments like pins and sockets to be inserted into other physical components.

The location of the notch changes with different versions, so that incompatible versions can’t be inserted physically into the slot. The number of notches also changes with the voltage and bit-width. Generally, PCI slots come with 3.3V or 5V operating voltage. The 5V cards have notches that are further from the edge, whereas the 3.3V cards have notches closer to the edge of the card. Universal cards possess notches at both locations so that they can be used in both 5V and 3.3V devices. The PCI slots with 64-bit bus widths have one extra notch in their connectors.

PCI expansion slots are very easy to use. These slots come pre-loaded into the motherboard. So, it is better to buy a motherboard with more PCI or PCIe slots for further upgrades and more accessibility. To use the PCI slots, we need to choose hardware that comes with compatible versions of PCI expansion cards.

If compatible, we can attach the expansion card directly into the expansion slot by pushing them inwards until the grip between them is firm. The contact points must be clean before inserting the component, otherwise, the bandwidth will be affected, and even the connection may hamper. Incompatible PCI cards can’t be used in the same motherboard, so different specialized connectors can be used.

Originating from the old PC-XT and PC-AT technologies, which were communized as ISA (Industry Standard Architecture), PCI slots come in different versions and types. There are several PCI versions available to date. They are named PCI 1.0, PCI 2.0, PCI 2.2, and so on. Each of the newer versions carries more bandwidth and clock speed also varies between them. But there are different types of PCI too, which are used for different purposes.

These are the most commonly seen PCI slots and cards. 32-bit PCI cards have 1 notch. The notch is located close to the starting point of connectors for 3.3V cards, and at the endpoint for 5V cards. It isn’t forward compatible with the 64-bit variant because of the physical location of notches, and the 32 connector positions on the card.

The common way to identify a 64-bit PCI card is the 2 notches compared to only 1 notch for 32-bit cards, and it’s slightly longer than the 32-bit. In 3.3V 64-bit PCI, the notches are at the 2 ends of the card, whereas 5V 64-bit has 2 notches very close to each other. 64-bit PCI cards have 32 contacts on both sides of the cards for more detailed purposes.

Also known as PCI-Extended, the PCI-X is backward compatible with previous versions of PCI slots. It is a 64-bit width bus that can be used in 32-bit PCI interfaces too. PCI-X slots are most commonly used in servers to fulfill the need for higher bandwidths. PCI-X 1.0 has 133MHz clock speed, and PCI-X 2.0 has 533MHz clock. The delivered data transfer speed is 1064MB/s.

AGP (Accelerated Graphics Port) is another type of specialized PCI expansion slot used only for video cards. Before PCIe came in, AGP was the method for using graphics cards. These are smaller in length than the PCI slots and are incompatible to them.

A major upgrade from the previous generation PCI cards is the PCIe (Peripheral Component Interconnect- Express) or PCI-Express cards, which replaced the original PCI models and is used in almost every system today.

PCIe is superior to all the PCI versions including PCI-X due to the much higher bandwidth and better compatibility. While PCI was neither forward nor backward compatible, PCIe is compatible across all its versions. However, it isn’t compatible with the PCI.

PCIe utilizes a series transfer method unlike the parallel one of PCI. This prevents bottlenecking when multiple PCIe cards are in use while keeping the bandwidth to its max. Structurally all the PCIe slots are the same, only difference in length. So, any PCIe card can be used in any PCIe slots. Open-ended PCIe slots are also available to fit bigger cards into smaller ports.

Unlike PCI, PCIe can handle graphics cards too. Mainly PCIe x16 is used for this operation. PCIe comes in x1, x2, x4, x8, x16, and x32 versions which describe how many series of data can pass through the bus. Almost all the modern-day hardware components like graphics cards, RAM, sound cards, ethernets, are compatible in PCIe expansion slots.

Types Of Ram And Ram Slots

Expansion Cards For A Computer System